I actually had a couple YES signs in my yard much like the one below, also below are pictures of the doctored sign, and on Saturday while mowing the lawn noticed thay had gone missing. The next day I e-mailed for more signs and got a call explaining that the person who had placed them had driven by on Saturday and saw that the sign on Nocol St. had been doctored so he stopped and took it down, the one on Needham was not even there.

He had originally thought I might have done it but after talking to me we figured that whomever is doctoring the signs likely took the one off Needham and doctored it then replaced the one on Nicol St. with it. As can be seen this was not a hack job but professionally made decals used to replace specific sections of Yes Extinguiosh the HST signs. While one has to admire the initiative on their part they should be aware that the RCMP are investigating. 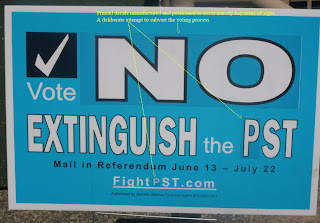 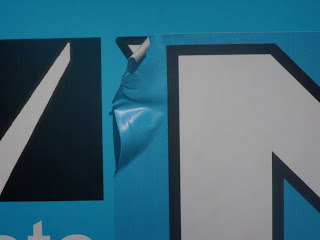 Again in case it is not clear where I stand: 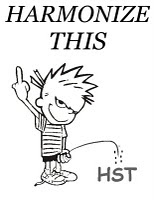 It's tough to find anyone in Nanaimo voting to keep the tax
Walter Cordery, The Daily News
Published: Thursday, July 07, 2011
Sentiment towards HST, referendum is largely negative

If you wish to read the many letters etc. published in the Daily News regarding the HST go to: Canada.com search HST Nanaimo