ELECT GORDON FULLER TO COUNCIL ~ WHY ME? 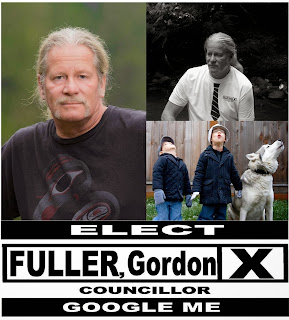 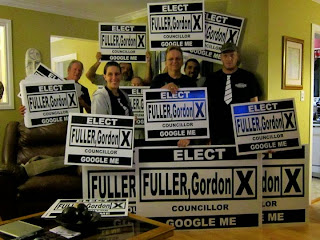 ----------
In choosing Council Mayor and School Trustees I encourage folk to dig deeper than just looking at the propaganda we as candidates put out.

Many see sitting on council as a position of power; I see it as a position of trust, trust that I would work towards the betterment of the ENTIRE community.  I have proven through community involvement that I do not just ‘talk the talk’ but ‘walk the walk’ as well.

A third generation Nanaimoite, 33 year resident of Nanaimo, I am a long time Community and Social Advocate. I believe every Citizen capable of contributing to making the City of Nanaimo a better place.

Employed in the Social Service Sector with adults and youth for almost 20 years I also have considerable experience working with boards and committees on issues ranging from Homelessness & Affordable Housing, Food Security & Poverty, to Neighbourhood & Community Planning and Downtown Revitalization.
Current Community Involvement:

A regular attendee at Council meetings, for over a decade, I have appeared as a delegation to advocate on a wide range of issues. Asked if I think I can accomplish as much as a City Councillor as in my current advocacy role; I see this as a higher level to work towards building a better community for ALL.

When elected I will bring a new level of Experience, Trust, Openness, Inclusiveness and Common Sense to the position.

I believe every Citizen capable of contributing to making the City of Nanaimo a better place.

A long time Social and Community Advocate I know it is critical to recognize the importance of a healthy diverse economy in providing meaningful employment and the necessary tax base from which to run our fair city. We need a strong advocate on council who understands the issues in all areas of the city.

We need to focus on the preservation of Nanaimo’s heritage and Parks; development that works in harmony with the waterfront and mountain vistas, maintaining the unique character of neighbourhoods and the community, Citizen Driven and Not Developer Driven. Smart Growth not rapid growth should determine Nanaimo’s future.

We need to implement sustainable small-scale social programs throughout Nanaimo that move away from the institutional and towards community integration. We must work towards Social Equality.  It is imperative that we, as a community, recognize and value diversity and the potential of ALL citizens in contributing to make Nanaimo a vibrant and inclusive community.

Much of what I have done over the years has been towards encouraging involvement in the municipal process; sadly participatory democracy, despite being a tenet of Nanaimo’s Strategic Plan, is at threat in the current Governance Revue.
I want to ensure Participatory Democracy remains a priority, and in fact increase avenues for such through regularly scheduled Town Hall meetings throughout the community. Rather than eliminating polling stations I want to see more so as to increase voter participation.

I will also push to have not just Council meetings videotaped but all committee meetings. Realign the power structure at City Hall.

Your council needs to recognize that social, environmental, cultural and economic aspects are intertwined; linking the community together. A focus on one without the others detracts from the whole.

I encourage citizens to vote in the upcoming election and in saying so also encourage they research the candidates as well.

SOME ‘A’ MY STUFF

2014 Nanaimo Municipal Candidate Platforms - Shaw TV Nanaimo
Mine: http://youtu.be/bwE3e1iHtWU?t=37m38s  (For some reason this link does not work :( )

This was from the election in 2011, Daily News interviews; some of the questions still pertinent. http://communities.canada.com/vancouverisland/blogs/newsroom/archive/2011/11/02/130.aspx

2014 Nanaimo Municipal Candidate Platforms - Shaw TV Nanaimo
All: http://www.youtube.com/watch?v=bwE3e1iHtWU  (For some reason this link does not work :( )

Youtube: The last one by Progressive Nanaimo I was in the full throws of a nasty cold and looked the part.  T'was still fun :)

A review of all three forums Progressive Nanaimo https://www.facebook.com/ProgressiveNanaimo did.

Congratulations, Gord! We are absolutely thrilled that you got in.