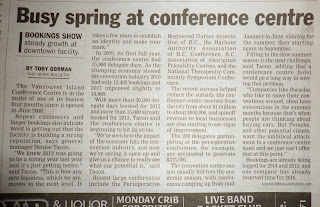 CLICK ON PICTURE TO VIEW LARGER IMAGE
I sent off the following Letter to the Editor about the story 'Busy spring at convention centre' that appeared in the April 29th Bulletin. Unfortunately the story is only in the hard copy and not on the Bulletin website. While it is all well and good to look at world through rose coloured glasses it is also good to take a step back and look at reality. Until one is willing to look at things as they really are then it is impossible to look at means of making them better.
Re: Busy spring at convention centre
Anyone reading this story might assume that the VICC is on the right track and doing well; a modicum of research however shows that this is not exactly so.
First off the story states that 30,000 delegate days are expected this year. This is exactly the same number that was being hyped for 2011 and yet we see that only 13,980 delegate days, less than 2.5% capacity, actually were achieved.
Secondly it is important to note that included in delegate days are those of the weekly Sunday Church service the ‘Meeting Place’. At an estimated 150 people attending per week this accounts for 6500 delegate days during the year, almost half of all delegate days in 2011. If, a really big if, the 30,000 proposed delegates do materialize this year it would still account for more than 20%.
A quick perusal of the VICC website will show that for the last six months of this year, other than the ‘Meeting Place’, only one convention and one other event are scheduled.
Half truths expressed through stories such as this do nothing in moving this facility forward. We must stop looking at the VICC with eyes wide shut and dreams of a hotel as the only option of salvation. Only by openly recognizing the facilities flaws can we then move forward to rectify them.
As published: Delegate numbers fail to tell full VICC story

Email ThisBlogThis!Share to TwitterShare to FacebookShare to Pinterest
Labels: Conference Centre, Letters to the Editor